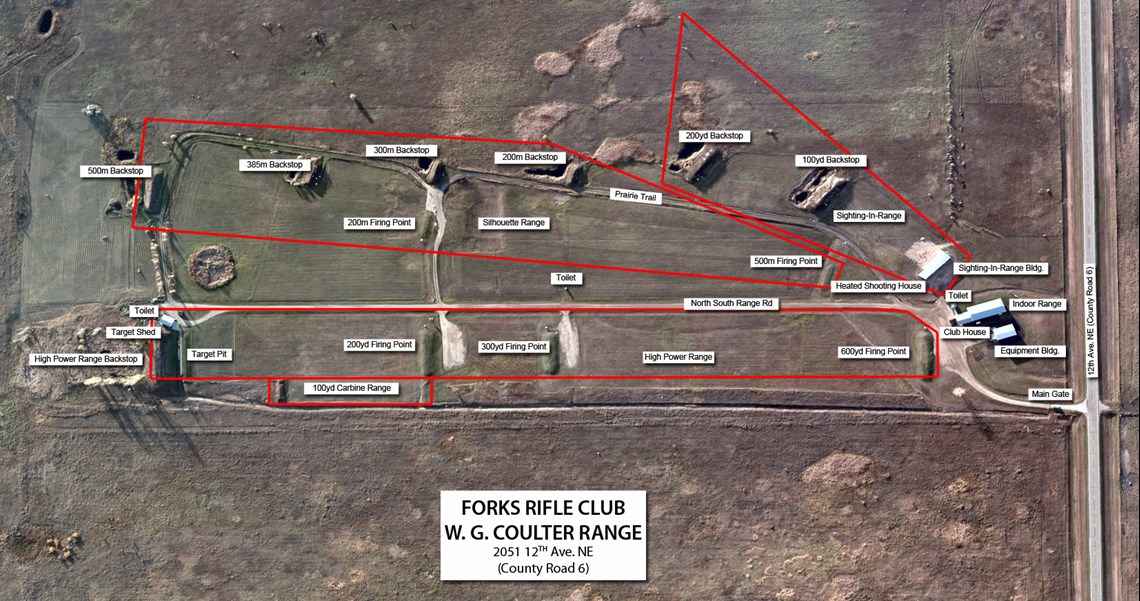 The heated indoor range is utilized for matches, winter leagues and the junior marksmanship program. The fifty foot range has eight firing points and utilizes a steel backstop with a shredded rubber bullet trap. The air handling system utilizes filters and a heat exchanger to maintain air quality. The range is restricted to .22 short, long or long rifle caliber firearms. The range is inactive June through September.

The new shotgun shooting area is equipped with a trap thrower operated by a 12-volt solar charged marine battery that will hold a case of birds in the top magazine. Click here to see images of the thrower. Before turning on the machine, be aware that the throwing arm is spring loaded and the main disconnect (the metal box on the plywood enclosure) needs to be in the off position. After the magazine is loaded, turn on the main disconnect switch and then turn the toggle switch to on.

The machine does not oscillate, making it user-friendly for beginning shooters. By standing behind the thrower and shooting straight away targets, newer shooters will learn proper sight picture. The machine has a long cord on the switch so, once straight aways have been mastered, a shooter can move side to side to work on lead and follow through. When done shooting, please remember to roll up the cord, turn the toggle switch to the release position, and leave the throwing arm uncocked.

The high power range was the first range established on the W. G Coulter Rifle Range complex. It consists of an earthen backstop with a target pit behind an earthen backed concrete wall which holds fifteen target carriers. The target carriers hold individual target frames for each firing point. The targets are pulled and marked by individuals on one relay during the conduct of a rifle match or league, while members of another relay fires. In cases of rifle matches a third relay scores on the firing line. Between the stages of the match the relays rotate duties. There are raised firing points at 200, 300 and 600 yards. Shooting benches are located at the west end of each firing point for individuals to use in preparing for matches. Before utilizing the facilities on the high power range, turn on the strobe light located on the east side of the sighting-in-range building. This indicates that there is activity on the high power range and shooting on the sighting-in-range is restricted to the 100 and 200 yard backstops. If anyone is utilizing the sighting-in-range facilities inform them of your intentions to use the high power range. Remember to turn the light off when you are finished on the high power range.

The sighting-in building contains seven unheated bays with overhead doors. Each bay contains a shooting bench. Be sure to open the doors completely before shooting and close them when done. On the southeast end of the building is a heated shooting house with three benches. The shooting house also has access to an illuminated 100 yard target frame, which permits shooting during hours of darkness. There is an additional annual fee for access to the shooting house. Members can shoot on targets located on the backstops of the silhouette range from the sighting-in-build providing they have physically assured that there is no one on the high power range or silhouette range and they have placed the chains up across the north south range road and the access to the prairie trail. When the chain is up across the entrance to the sighting-in-range parking area, the sighting-in-range is closed.

Practice matches are designed to let people practice their rifle skills at both 300 and 600 yards. These matches allow for shooting different rifles at each range. Shooters are divided into two groups, one group will shoot while the other pull targets and scores. Once complete, the two groups will switch places so everyone has a chance to shoot. If you’re new to 300 or 600 ranges, there is always someone at these practice matches to help get you on target.